It occurred to me the other day that we in the custom coin business used some terms that are not really that common and could bear some explanation.  No doubt some people will correct me on some of this but someone always does.  I’ll give it a shot anyway.

To make a die struck coin (which is what almost all high quality military coins are) the factory must create hardened steel dies.  These dies are a reverse relief models of the coin to be struck.  When the two dies come together with media between them and  under great pressure the coin is produced.  Making these dies is a time consuming and skilled task.  Master die makers hand carve the dies in some cases and are skilled at producing great 3d or relief areas.  Like any good sculptor they can make designs of exquisite detail following a design.  Having these dies made is sometimes an expensive task.  We are very fortunate to be able to keep our die charges low but many companies charge very expensive die charges.  Ours are as inexpensive as $70.00 or in some cases less per side.  Some companies charge hundreds.

Their are new machines that make dies and our factory has some of them.  They are fantastic.

Can I have my dies when you are done making my military coins?  In a word….no.  Two reasons.  The first is that these are very often machine specific.  You would not necessarily be able to use them on another machine.  The second (and by far the most important ) reason is that I don’t want to be bothered with it.  How is that for honest?  Actually in nearly two decades in the challenge coin business I have only been asked for the dies a handful of times so that has not really been an issue.  What would happen if we gave away our military coin dies?  Well more often than not we would have a customer wanting to send them back to us for a reorder.  This takes time, money and who needs that?   When pressed the few who have asked for them wanted them to prevent their coins from ‘going public’.  I assure them that I will not make their coin for anyone else and that usually allays their fears.

So What Is 3D on a Challenge Coin? 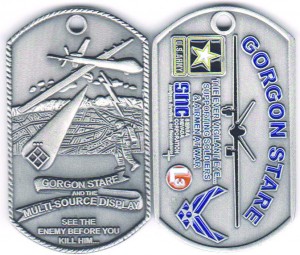 Here is a coin I chose as a good example.   Look a this coin.  Which of the sides is 3d and which is 2d?  Do you see the difference?  If the “front” is the side on the left and the back the one on the right clearly the one on the left has the 3d details.  But, you say, both sides have metal that sticks up.  Isn’t that 3d.  No sir it is not.  In the coin business 3d refers to features that are carved in relief.  See how there are subtle curves and different levels of metal on the front?  THAT is the 3d.  On the back there are just two levels of metal.  That wasn’t so hard.

WHAT MAKES A COIN MAKER LAUGH

OK.  So here is the deal.  NO you say!  The side on the right is the front and the one on the left is the back!  You will not believe how many times I have heard that.  Even, once from a general……  I laid two of the same challenge coins on his desk.  I had each turned to different sides.  I asked the general “How do you like the front?”  To which he replied…”That is not the front the other side is the front”.  And he turned over the left coin and then the right coin so that they now showed sides opposite from what they did before.  Remember when that little kid in Anne Hall slaps his forehead……?  Don’t do that in a general’s office.  Really.  I does not go well after that unless he laughs.  He didn’t laugh.

ANYWAY….I guess it is good to remember which side is the front and always put it in your pocket that way so you don’t get in trouble.  And you are not George Raft so do not flip your challenge coins.  It annoys people.  If you must flip coins, and some of you will.  Here is an education on what it is and how to do it….. You had to look didn’t you?  I seem to have strayed from my topic again….

So to sum it up.  Think of it this way.  If there are multiple levels the coin and these flow together then it is 3d.  If there are two or more levels of metal, flat across the top, it is 2d.

Why Does 3d Cost More?

Two answers.  First it is much harder to make.  2d details can be easily produced using automated processes.  3d not so much.  With our new machines we can reduce the amount of hand carving that goes into 3d die making but extra care in producing 3d molds really pays off in the final product.  Just to see if anyone is reading this, if you are hot the contact page and ask me to post a picture of the coolest 3d you have ever seen and I will post it to this blog.)

Second answer.  It is sometimes a way for coin makers to make money.  Our opinion is this.  We should allow you to make the best challenge coin possible as affordably as possible.  That is why we do not think of die charges as a profit center.  Indeed we usually use a flat rate which earns us a buck or two sometimes and costs us a bit sometimes.  It all comes out in the wash.  So don’t fret the 3d.  Make the coolest military coin that you can.  In the end you will be happy that you stuck the course and made the one that you like.

If you would like us to look at your design and give you some pointers on how to make it better we are happy to do that.  No charge.  Just drop us a message or a call and we will go over it with you.  What do you have to lose.  I also have to say this.  We sure try to beat anyone’s price on a comparable coin.

Give us a call.

Respnse to US Made Challenge Coins