It Takes Time To Write About Military Coins

The funny thing is that most of these challenge coin blogs write themselves.  Every day I go to work and every day someone calls, writes or texts questions or concerns that I have to address.  It seems to me that it would be a shame not to share my experiences with others.

The Custom Coin Subject That Got Me Going

One day I got a call from a customer.  She asked me how I knew that my Challenge Coin history page was correct.  I stammered around for awhile and told her about the research I had done, the people with whom I had spoken and time I had invested.  She was unimpressed.  “But how do you know it is all true, she asked.”  Well you can imagine what followed.  I set to this subject in earnest.  I checked sources, Googled like crazy, read and generally began a thought process that took me beyond of the usual story about the flyer in France during WWI.  I had no idea that my search for the original Military Coins would take me to ancient Rome.  But WAIT!

So let’s define what we mean.  I am not talking about money.  I am talking about commemorative coins.  So who made the first Commemorative Coin?  So far I can trace the history of military coins back to the Ancient Greeks.  (Sorry American Airman in France but they beat us to it.  Your coin is very special but not the first one I fear.)  It appears that around 480 B.C. the Greeks started commemorating military victories by striking commemorative coins.  One of these ancient military coins was minted in Syracuse to commemorate the defeat of the Carthaginians.  (The Carthaginians had quite a history of being defeated it would seem.)  So how old are commemorative Military Coins?  We are back to 480 B.C. and counting.   So the search goes on.  I have it mind some day to put the oldest coin I can find on one side of my own Challenge Coin.  Maybe that will be my 2015 Challenge Coin.  It would be very cool.  One thing is certain.  There are a whole lot of people writing about the history of commemorative coins who have not done their homework.  I will mention that I am on the trail of another surprise in this area but you will have to wait a bit for that one.  Keep checking back.

One day I got a call from a guy who wouldn’t give me his name.  He hemmed and hawed and finally got around to asking me if I knew what casino coins were.  I said that I certainly did and had fed a whole lot of them into slot machines.  He finally blurted out his question.  “Why don’t you make some one dollar ones and put them in slot machines?”  Quite the entrepreneur this guy was it seems.  He seemed generally disappointed when I told him there was one good reason and two great reasons not to.  The good reason was that the tokens would cost me more than a dollar to make.  He couldn’t get his head around this one.  He seemed to be totally understanding when I mentioned the two great reasons…..It is illegal and I don’t want my legs broken.

Can You Put A Propeller on my Military Coin?

Yup.  It was a quick answer.  He said, “I think you may not understand.  I want a propeller that spins on the coin.”  He was right.  I had not understood.  But I designed the thing, engineered the mechanism and prepared to make the coins.  He backed out.  I almost made them anyway.  What a great idea.  I have pitched it to any number of aviation unit commanders and sergeants major.  So far they have all looked at me like I had spinach in my teeth.  Some day someone will ask about it again.  I may not be able to get it done but I sure want to try.

See here is what you don’t want to do.  If you are giving a factory instruction about a design be sure to do two things.  Be specific about which military it is of which you are speaking and be careful to send a drawing.  This is not a Staff Sergeant Major stripe. 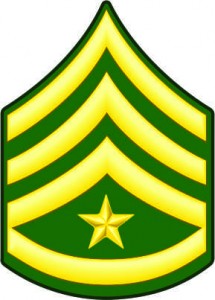 Not exactly what we had in mind.

Well.  Suffice it to say that disaster was averted by lighting quick thinking and definitive action but there is a lesson in this for all of us.

There is much more we can talk about.  Sometimes it is just a good idea to get some ideas out there and let people chew on them.  I hope you all will feel free to message me and let me know what you think.  If you would like to contribute that would be super.  I would love to hears some great stories about Military coins and Challenge Coins.  Give me a call if you would like.